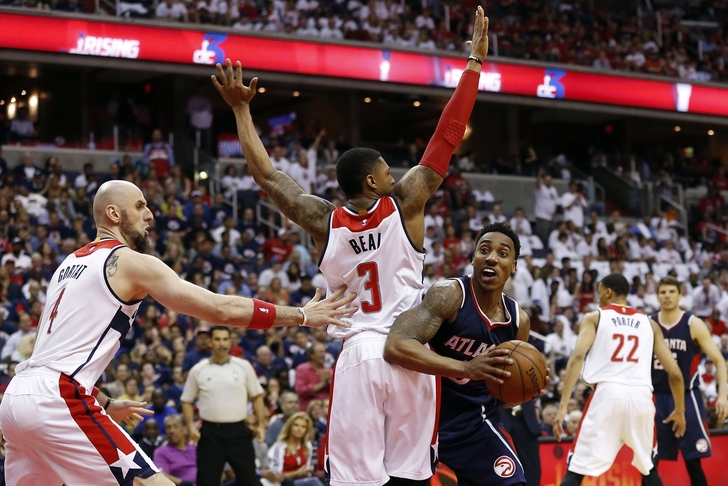 The Washington Wizards have done an admirable job with superstar point guard John Wall out with a fractured wrist/hand. However, they could have used him on Monday in Game 4, as the #1-seeded Atlanta Hawks used a resurgent offense and timely defense to regain home-court advantage with a series-tying 106-101 win.

Atlanta got its offense alive and kicking from the get go, draining a ton of open looks in the first half en route to posting an eye-popping 65 points and taking a ten-point lead into the break.

The teams would trade buckets in an even third, but the Wizards would finally make a move in the fourth to cut the deficit to two possessions. However, after Washington closed the gap to four around the two-minute mark, Atlanta's Jeff Teague would drain a dagger triple to make it 104-97 for the Hawks.

Washington would keep charging with four unanswered, but Paul Pierce would clang a game-tying jumper with four seconds left, sealing a huge victory for the Hawks heading back to Georgia.

Atlanta's offense is deadly when they swing the ball around the half court efficiently, and they did just that on Monday. After being baited into iso plays during their two losses in this series, the Hawks dished out 30 assists and opened up a ton of easy-to-knock-down jumpers and lay-ins. Brilliant work all around.

Jeff Teague was magnificent all night long, scoring a playoff career-high 26 points and dishing out eight dimes to set up a balanced Hawks offensive attack. He was both a table-setter and a scorer, giving Atlanta the breakout game it needed to tie this series back up.

With his usual backcourt partner-in-crime once again sidelined, Bradley Beal did two guards' worth of work in a next level performance. He finished with 34 points, seven assists, and six rebounds while working his butt off on defense and basically playing Superman.

The series shifts to Atlanta for a pivotal Game 5. Tipoff is slated for just after 8:00pm local time.