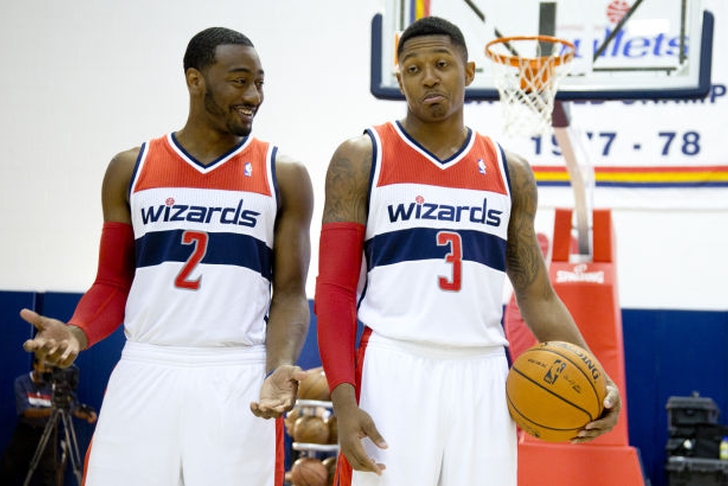 After a dazzling performance from second year guard Bradley Beal Tuesday evening against the defending champion Miami Heat, the Wizards now set their sights on Thursday's matchup with the New York Knicks.

Suffering losses in the teams first two preseason games against the Brooklyn Nets and the Chicago Bulls, the Wizards were able to grab their first win of the preseason in their matchup against LeBron and co., 100-82.

John Wall and Bradley Beal looked like the gifted backcourt tandem many anticipated, playing off each other’s skill sets seamlessly. John Wall flashed his one of a kind quickness, as he was able to get a few fastbreak buckets, including a vicious left-handed jam over Chris Bosh. Also on display was Wall’s playmaking ability as he was able to dish out 8 dimes. Wall finished the game with a solid 13 points as well.

While Wall put on a decent offensive performance, I was most impressed with Wall’s defensive effort. He played feisty defense; disrupting passing lines, playing tough on-ball defense and consistently keeping his hands active. This effort resulted in 5 steals for Wall. His defense clearly set a tone for the team, which is important for a team trying to prove they belong in the playoff conversation.

Veteran forward Trevor Ariza looked good in his first preseason game as a starter. Ariza’s real value has always been in his length and versatility as defender. This skill set was on display as Ariza spent much of the night guarding LeBron James. Ariza finished the game with 13 points, 9 rebounds and 5 assists.

The surprise of the game was Al Harrington, who barely played in the first 2 preseason games. Against the Heat, Harrington played 17 minutes contributing 14 points. Big Al was able to play the ever-important stretch four roll, knocking in 3 shots from downtown.

Harrington’s roll in the rotation should be key in the Wizards success this season especially with Emeka Okafor out indefinitely with a neck injury. After an impressive performance against Miami, look for Harrington to get more minutes.

While many Wizards played well, the true star of this game was the youngster out of the University of Florida. Bradley Beal was nothing short of impressive as his game looked as polished as we’ve seen it since he arrived in the NBA.

His stroke looked pure and his body looked health, which is a great sign for the Wizards as they are expecting Beal to take the next step this season and avoid the dreaded sophomore slump.

Beal lead the way for the Wiz, dropping 17 points in the first half and finishing with 29 points. Beal was moving without the ball and able to find his shooting sweet spots. His three ball was on point too as he was able to hit on 4 of his 8 attempts from long range.

Hopefully the Wizards can use this impressive preseason victory as momentum as they prepare for Thursday's contest against the Knicks.

Wizard’s fans can be excited after seeing how affective Beal can be playing alongside Wall. These two have the potential to be the best guard tandem in the NBA. Wizards fans are salivating to see more of the play they saw against the Heat. One clear takeaway from Tuesday's contest is the Wizards can play with anybody if they play smart, aggressive team basketball. The Wizards hope this type of play carries over into the regular season.

Washington will host the Knicks in Baltimore, MD Thursday evening at 7 pm.