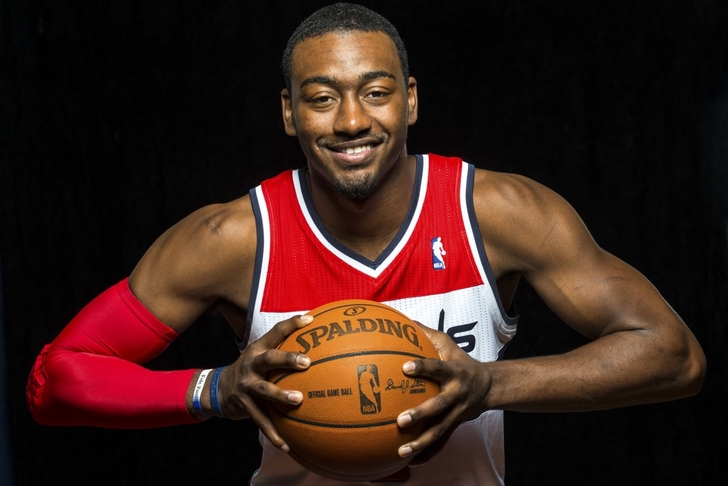 1. John Wall is going to shoot – for better or worse.

John Wall’s main focus this past offseason was improving his shot. He’s worked day after day with assistant coach and former point guard Sam Cassell on his shooting mechanics, form and on expanding his range.

Despite some early season struggles, Wall insists he is fully confident in his shot and that he’d continue to shoot when he had the right opportunities.

The biggest knock on Wall’s game throughout his first 3 seasons in the NBA was his lack of a perimeter shot. When Wall returned from injury last season, his shot looked vastly improved. This season, Wall struggled out the gate including 5 games where he shot under 30% from the field.

Wall hasn’t let his shooting struggles deter him from taking shots as he is averaging a career-high 16 FG attempts per game. Though he has struggled making his shots so far this season, his shot has started to fall of late. Wall scored a season-high 37 points on 71% shooting in Friday’s loss to the Raptors. In Saturday’s contest against the Knicks, Wall dropped 31 points while shooting 55% from the field.

Overall, Wall is shooting 41% from the field and knocking down 31% of his shots from beyond the arc. As defenses are sure to sag off Wall and force him to shoot, Wall must prove he can knock down open shots so defenses are forced to play him tighter. For the Wizards to take that next step as a team, Wall’s shot selection and shot making are key.

2. Gortat & Nene are the only big men the Wizards can rely on.

After Emeka Okafor went down in the offseason we knew that the Wizards frontcourt would be thin. However, there was some optimism that between Al Harrington, Kevin Seraphin, Trevor Booker and Jan Vesely someone would be able to step up and play a bigger role.

Apparently, Washington’s front office knew better, as they brought in Marcin Gortat just prior to the first game of the season. That move has proven to be huge for the Wizards as Gortat has looked great, averaging 12 points and almost 10 boards per game.

Nene has also played strong basketball this season, averaging 14 points and 6 boards per game. Together, Gortat & Nene form one of the better frontcourt tandems in the league.

The problem is the rest of the big men on the Wizards roster. Al Harrington has missed the last 6 games with a sore knee. Trevor Booker and Kevin Seraphin are liabilities and fouling machines when in the game. Jan Vesely has carved a decent niche out for himself as a reliable hustle player for the Wiz. He always brings energy and effort when on the floor even though his offense leaves a lot to be desired.

If Gortat and/or Nene miss time with injury – which is evitable with Nene – the Wiz will be in a world of hurt.

Bradley Beal is quickly becoming one of the best 2-guards in the league in just his second season. The 20-year-old is the perfect backcourt compliment for John Wall as he gets to roam off the ball and knock down jumpers. Beal is the Wizards most consistent offensive threat this season and is averaging 20 points per game.

Key areas that Beal must improve are tightening up his handle and his decision-making. Too often in late game situations Beal has turned the ball over by either losing the handle or making a sloppy pass. These areas will improve with experience.

While Beal may not make the all-star team this year, his notoriety will continue to rise and soon he will become a household name among NBA fans. However, it wouldn’t surprise me if both Beal and Wall sneak onto the all-star roster this year.

As I indicated in my NBA Awards Predictions, don’t be surprised if Beal continues his ascension up the list of the leagues best 2-guards, while possibly taking home the leagues Most Improved Player award.

When the Wizards signed Eric Maynor this offseason, most believed that Maynor would be a perfect fit as John Wall’s backup.

Maynor made a name for himself as one of the better reserve point guards in the league during his stint in Oklahoma City. Thunder Head Coach Scott Brooks would often play Maynor at the point and move Westbrook to off-guard.

While Maynor’s numbers never jumped off the stat sheet, he always demonstrated a great feel for the game and a nice stroke from downtown.

This season, Maynor has simply looked subpar. When he’s running the show, the offense lacks any flow and he often takes ill-advised shots and floaters that are nowhere near going in.

Maynor’s lackluster play has gotten him demoted to second guard off the bench in a few games; however, Wittman often has no choice but to play him because the Wizards don’t have another reserve point guard on the roster.

To make things worse, the Wizards gave him a $2 million player option for next season.

5. The Wizards want us to forget Otto Porter Jr. is on the roster.

No one knows what’s really going on with Otto Porter Jr., the league’s 3rd overall pick. The official word from Head Coach Randy Wittman is that Porter has a hip flexor injury that is taking a while to heal.

Porter has yet to even practice with the team.

The odd thing about the Otto Porter situation is a few weeks ago it was reported he received an MRI. Since the test was taken, we have yet to hear the results. No one outside of the organization really knows the severity of Porter’s injury. This makes me believe it may be more serious than the Wizards are letting on.

The team hardly talks about Porter, which is odd considering he was such a high draft pick.

The Wizards could really use Porter right now with Trevor Ariza nursing a tweaked hamstring and the bench struggling.

Wizard’s fans have to be wondering when Otto Porter will make his NBA debut. For now, we’ll just have to wait and see.