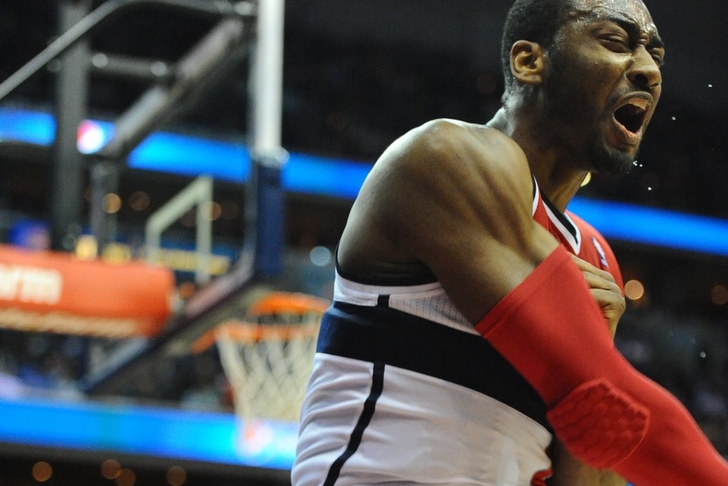 After a disappointing 2-7 start to the season, a pleura of injuries and little to no bench production, the Wizards are beginning to look like the playoff caliber team many predicted they would be. With Nene and Beal back in the lineup and somewhat healthy, Washington has won 4 of the last 5 road games and current hold a record of 14-14.

For most teams a .500 record is nothing significant, but for the Wizards it is affirmation the franchise is headed in the right direction after years of dreadful play. With a little more than a quarter of the season completed, here are 5 takeaways for the Wizards season.

Towards the end of the Washington Wizards dreadful 2012-13 season, John Wall stated that he believed he was worthy of a max-contract. Many scoffed at the notion that Wall, who has missed over 30 games last season and had never been on a winning team since entering the league in 2010, was worthy of such a financial commitment.

During the offseason, Wall was granted the 5 year $80 million dollar max-contract extension he desired. The Wizards extended Wall with the belief he would quickly join the elite class of point guards in the NBA and he has done just that.

28 games in the 2013-14 season, Wall has taken his game to an elite level. So far this season Wall has been a top-5 point guard in a class that includes Chris Paul, Russell Westbrook, Steph Curry and John Wall, with last spot being debatable between Damian Lillard, Kyrie Irving and Jeff Teague.

The Wizards get no nationally televised games so while people get to see Paul, Westbrook and Curry play often, Wall gets very little national publicity. The average basketball fan doesn’t get to see how well Wall has played.

Wall is the Wizards most valuable player and without him the offense simple doesn’t run well. Wall leads the league in touches per game with 99.4., while leading the team in scoring (20.2 ppg) and assists (9 apg). As this team continues to get better and gain respect league-wide, people will began to appreciate Wall’s high-level of play.

Wall already has four 20-and-10 games this season after having just three all of last season.

John Wall has official turned the corner and has become an elite NBA point guard.

2. When healthy, the Wizards can compete with any team

Nene, Bradley Beal, Al Harrington, Trevor Ariza, Martell Webster, Kevin Seraphin and Glen Rice Jr. have all missed games due to injury. Both Nene and Beal are currently under minute restrictions due to their injuries, while Seraphin (knee) just returned and Rice Jr. (wrist) is out for a few more weeks. Harrington has only played in 7 games all season and is not expected back until late January.

It would be nice to see how good this team can be with a healthy roster, but I wouldn’t bet on the Wizards being that fortunate. If the Wizards can garner a mildly healthy roster come playoff time, don’t be surprised if the Wiz win their first playoff series since 2005.

3. The bench unit is finally coming around

At the beginning of the season, Randy Wittman was forced to play his starters (Wall, Beal, Ariza, Nene, Gortat) too many minutes due to the lack of production from the bench. This lead to too much wear-and-tear, causing injuries to Beal and Nene.

Over the past few games, Coach Wittman appears has finally found a way to maximize bench production. This is partially due to having Beal, Ariza and Nene back in the rotation.

Coach Wittman has decided to use Nene off the bench since his return from a sore achilles due to his limit restriction. This move has proven to be the spark the bench unit needed. Adding Nene to a bench unit that includes Otto Porter Jr., Martell Webster, Garrett Temple, Jan Vesely and Kevin Seraphin, has provide a much needed go to guy for the second unit.

During the teams most recent 4 game road trip (3-1) the bench averaged about 35 points per game. Players like Kevin Seraphin and Garrett Temple have stepped up their play since Nene has join the bench unit. Coach Wittman has finally taken Eric Maynor completely out the rotation, as Maynor hasn’t been the steady back point guard he was brought in to be.

While the bench unit is still inconsistent at times, progress is clearly being made. With the return of Harrington and Rice Jr. coming within the next month or so, the Wizards bench should continue to get better.

After their most recent victory against the Pistons, the Wizards have over 30 points from their bench in each of the past 7 games.

4. Trevor Ariza continues to be a difference maker

In his 9th season in the NBA (2nd with the Wizards), Trevor Ariza is having the best season of his career and is making a real difference on both ends of the floor.

Ariza has proven to be a lethal 3-point threat and the Wizards best overall defender.

Health is the only thing standing in the way of Bradley Beal becoming a star. If he can stay on the court, Beal will soon maximize his star potential. He has a beautiful shooting stroke and an ability to hit shots when it matters most.

Beal is averaging just under 20 points per game, while shooting 47 percent from downtown.

When Beal improves his handle and shot making off the dribble, he will be extremely difficult to stop. The scary thing is he is only 20-years-old.