5 Offseason Moves the Wizards Should Make 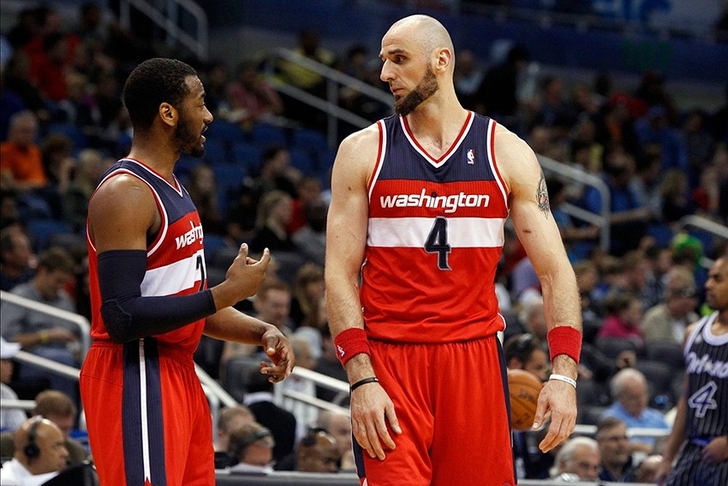 The city of D.C. rallied behind the Wizards playoff run in what ultimately was a very successful 2013-14 season in the Nation’s Capital. While this successful season should be enjoyed, the Wizards have some important offseason decisions to make in the coming months.

The Wizards have some key free agents including Marcin Gortat and Trevor Ariza. Head Coach Randy Wittman is on an expiring deal as well. With about $16-20 million in cap space this summer, the Wizards must figure out how to spend this money wisely to improve the team. Below are five moves the Wizards should make this offseason.

Marcin Gortat proved his worth during his first season in Washington. While his numbers don’t always leap off the screen, his impact is felt on both ends of the floor. Gortat is a good low-post player, a solid defender and a fantastic complement to Nene. More importantly Gortat is a great locker room guy that other players clearly enjoy having around. The Wizards must make re-signing Gortat a top priority, as quality NBA Centers aren’t easy to get a hold of.

Let me start this by saying that Wizards fans should sincerely appreciate and respect Trevor Ariza for the leadership and effort he demonstrated all season. I know plenty of fans would love to have Ariza back next season. However, with Otto Porter and Martell Webster already under contract for the next three seasons, I can’t justify the Wizards signing Ariza to the type of extension he will likely command for his services.

Ariza had the best season of his career, but at age 28 going on 29, the Wizards can’t afford to keep him around for $8-12 million a year.

When Otto Porter was selected 3rd overall in the 2013 draft, he was instantly dubbed as the future starting Small Forward for the Washington Wizards. His game was said to be a perfect complement to John Wall and Bradley Beal.

Due to a strained hip that hampered him for about 3 months, Porter missed time in the offseason, training camp and early season work with the team. Additionally, with Trevor Ariza breaking out and Martell Webster ahead of him of the depth chart Porter did not get much playing time. When he did play, Porter looks like a player who simply needs more experience and floor time with the starters to feel comfortable. He has great length and a nice perimeter shot.

This offseason he will have time to workout with Wall and Beal, which should allow him to be better prepared for his sophomore campaign. The best way for him to improve is to play substantial minutes.

Washington should believe in him and insert him in as a starter to see what they have in Otto Porter. Letting it be known that he is the starting SF will likely boost Porter’s confidence, which is important considering the setbacks he dealt with in his rookie season.

While the AARP Group (Andre Miller, Al Harrington and Drew Gooden) did a respectable job, it is time for the Wizards to upgrade their bench. Andre Miller has a $5-million player option on his deal, but the Wizards can buy him out for about $2-million. Harrington and Gooden are both free agents.

Both Kevin Seraphin and Trevor Booker are free agents as well. While all these players have been productive for the Wizards at one point or another, improvements are needed. From this group, bringing back Booker and Gooden should be the goal. Andre Miller played relatively well as Wall’s backup, but at age 38 you have to wonder if he is really the best option for the Wizards.

The Wizards top priority regarding their bench must be bringing in a quality combo guard to rotate in with Wall and Beal. Detroit’s Rodney Stuckey would be the first free agent guard I would look at to fill this role. He can both run the point and play off the ball. If his price tag is to hefty, Mo Williams should also be a free agent they should look at.

Adding a quality guard for the bench unit should be a priority this offseason. Ramon Sessions, Jodie Meeks and Devin Harris might be worth taking a look at as well.

5. Interview other coaches before deciding to retain Randy Wittman

Randy Wittman did a good job this season with this Washington Wizards team. However, I am not sold he is the right guy to take this team to the next level. The players seem to like him and to have bought into what he is selling, but this Wizards team could have won 50 games this season and slightly underperformed in key critical moments. Wittman offensive sets are often stale and his play calls often leave much to be desired.

While I do partially believe Randy Wittman is worthy of a new contract, the Wizards would be wise to interview other candidates as well. Coaches like George Karl and Alvin Gentry have a history of coaching young guards and Gortat thrived in the pick-n-roll under Gentry’s guidance in Phoenix.