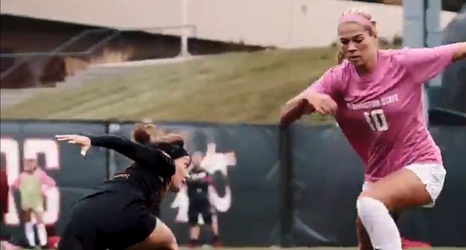 The weekend didn’t produce any victories for the Washington State Cougars soccer team, but it did produce one viral moment that’s making the rounds of social media — for good reason.

Now, take a closer look — Alger doesn’t even touch the ball during the entirety of the move, which brings the helpless defender to her knees:

That kind of ankle breaking belongs on one of those old And1 mixtapes. Is this the soccer equivalent of getting dunked on? Maybe we should go with that metaphor, because that poor ASU defender is never going to live down being put on that poster.