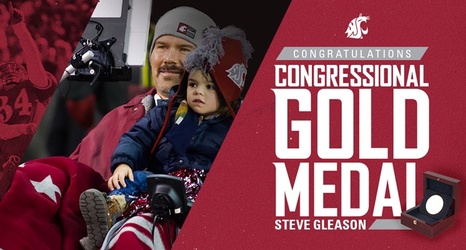 WASHINGTON D.C. – Washington State legendary Hall of Famer and former NFL player Steve Gleason, a New Orleans hero for his memorable play the night the Mercedes-Benz Superdome reopened after Hurricane Katrina and an advocate for those diagnosed with ALS, received the Congressional Gold Medal in a ceremony at the Capitol Wednesday.

The recognition is the highest civilian honor bestowed by Congress. It requires the approval of two-thirds of both the House and Senate and the signature of the president. Sen. Bill Cassidy (R-La.) filed legislation to honor Gleason last year and announced the date of the ceremony in a news release.