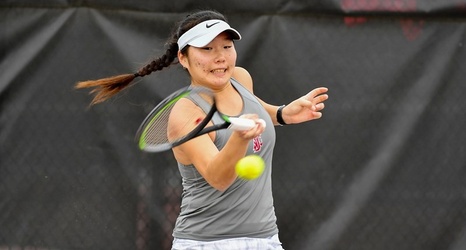 San Diego (13-3) captured the opening doubles points with wins on courts 1 and 3. On Court 2, WSU's Michaela Bayerlova and Yang Lee were leading 5-4 when play was stopped after the Toreros had clinched the doubles point.

In singles action, the Toreros posted straight-set wins in three matches to clinch the team victory. At No. 1, WSU's (13-15) Bayerlova forced a third set but could not capitalize in a 6-4, 3-6, 6-1 loss against No.