Reports: Jake Dickert to be hired as WSU’s next head coach 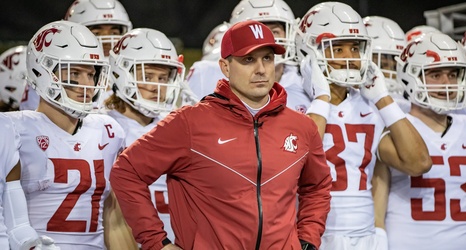 On October 19, Jake Dickert became the acting head coach of the Washington State Cougars football team. Somewhere along the line, he became the interim head coach.

Today, it looks like all qualifiers are set to be removed: A pair of media reports indicate that Dickert will be given the full-time gig. The news was first reported by Matt Zenitz of On3.com and later confirmed by SI.com.

No word on the details of a contract.

The move comes as little surprise, given that momentum seemed to be building for the former defensive coordinator as WSU won three out of its last four games, allowing them to secure bowl eligibility and culminating with the most lopsided Apple Cup victory for WSU in the series’ history, a 40-13 beatdown of Washington at Husky Stadium.