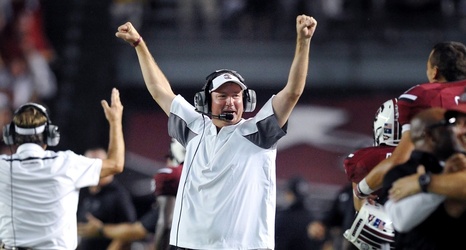 After spending two years mentoring the outside receivers at Washington State, Steve Spurrier Jr. is returning to a familiar part of the country and to the SEC to join Mike Leach at Mississippi State.

The Bulldogs haven’t formally announced any of Leach’s new assistant coaches, but Steve Spurrier Sr. told Chris Fetters of 247Sports his son would be moving to Starkville as the MSU coach builds his staff. While it’s expected Spurrier Jr. will be coaching wide receivers in some capacity, it isn’t clear if he’ll hold the same position he did in Pullman.

During his two seasons at WSU, Spurrier Jr.