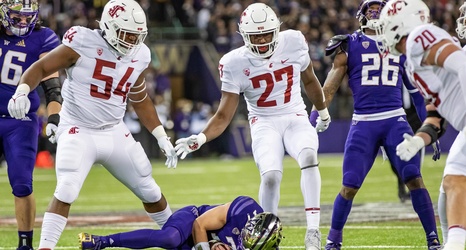 YES, THAT JUST HAPPENED. Interim head coach Jake Dickert and his Washington State Cougars (7-5 conference, 6-3 overall) just annihilated their in-state rival, the Washington Huskies (4-8, 3-6), by a score of 40-13. The 27-point margin of victory was the largest for WSU in the 121 year history of the rivalry and ended a seven-game losing streak dating back to 2013.

If this was a preview of the quarterback battle for the next three Apple Cups, Cougar fans will have plenty of reasons to be optimistic for the future. WSU QB Jayden de Laura threw just five incompletions in the contest, while UW’s Sam Huard threw four interceptions and posted a QBR of 5.