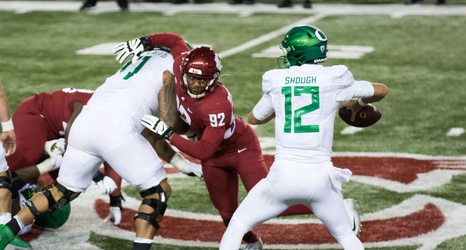 A strong first half showing wasn’t enough for the Washington State Cougars as the No. 11 Oregon Ducks dominated the second half to roll to a 43-29 victory in Pullman on Saturday.

The Cougs led 19-14 at the break behind three takeaways, but the Ducks rolled to 353 yards and 29 points in the second half to more or less cruise to victory.

Putting up 29 points on the Ducks is nothing to sneeze at, as true freshman quarterback Jayden de Laura once again had a strong game for WSU, throwing for 321 yards on 25-of-39 passing and two touchdowns.