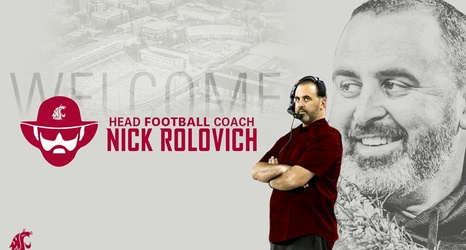 PULLMAN, Wash. – Nick Rolovich has been named the 33rd head football coach in Washington State history, Director of Athletics Pat Chun announced Tuesday. Rolovich, who agreed in principle to a five-year contract, will be introduced at a press conference Thursday, Jan. 16 at 2:30 p.m. in the Rankich Club Room at Martin Stadium.

"We are excited to welcome Nick Rolovich to Cougar Nation," said WSU President Kirk Schulz. "Nick is a proven winner who will bring an exciting style of football to WSU. We look forward to building on the momentum of recent seasons.