Looking forward is usually better on this weekend 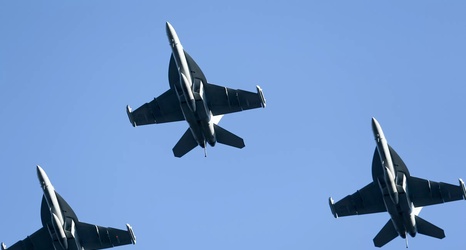 Good morning. How screwed up is that stupid November day every year? Well, the picture is apparently from the pregame flyover. The caption says that those airplanes are F-16s from McChord Air Force Base. In fact, they are not F-16s, they are F-18s. And they definitely are not from McChord AFB because F-18s are Navy planes and there are no F-16s stationed at McChord. But other than that, AP writers, you nailed it!

What’s the point of that story? Well, nothing really, aside from another illustration of the fact that even the simplest parts of that stupid day are difficult for some people.