From Pride Rock to Pullman: Nick Rolovich takes over at WSU 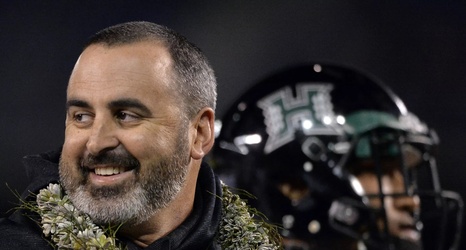 When Mike Leach surprised everyone by heading off to coach the Mississippi St. Bulldogs, all eyes turned to athletics director Pat Chun, who would be in charge of finding the next coach of the Washington State Cougars.

The search didn’t last long: Less than a week after Leach’s departure, Chun tapped Hawaii Warriors coach Nick Rolovich to be the next coach in Pullman.

Rolovich is a natural fit to succeed WSU’s most consistently successful coach. He runs the Run and Shoot offense, which is considered a close cousin of the Air Raid that Leach made so famous — and used to great effect while in Pullman, leading the Cougars to an unprecedented five consecutive bowl games.