Former 4-star Andrej Jakimovski is transferring from WSU, per report 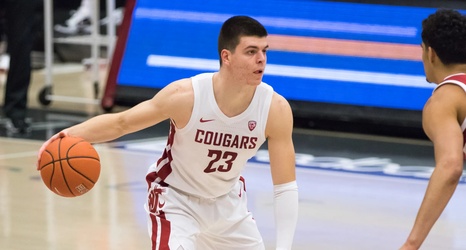 Former 4-star recruit Andrej Jakimovski has entered the transfer portal, according to a report by Verbal Commits, becoming the first domino to fall after last month’s commitment of Mouhamed Gueye put the Washington State Cougars further over the scholarship limit for the 2021-2022 season.

Jakimovski came to Pullman from North Macedonia with much fanfare — he was only the program’s fifth four-star recruit in the last two decades and first since 2009 (Xavier Thames) — and he proved himself worthy of the ranking with a solid freshman season in which he started 19 games and averaged 5.