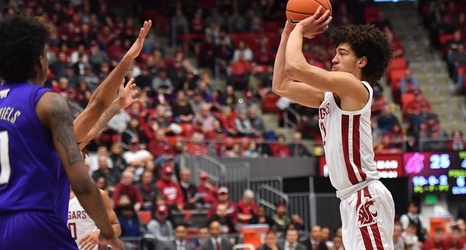 SAN FRANCISCO – Washington State Men's Basketball sophomore forward CJ Elleby was named the Pac-12 Player of the Week for the week ending on Feb. 9, the conference office announced Monday. Elleby, who also earned the top award Jan. 18, is the first WSU player to earn multiple weekly awards in a season since the legend Klay Thompson went back-to-back in November of 2009. The two awards is the first time since 2011-12 the Cougs have earned multiple weekly awards in the same season.

In the first half of the Boeing Apple Cup rivalry series with Washington, Elleby, a Seattle native, put on a show against the team from the West Side as the second year Coug led WSU to a convincing, 79-67, win over the Huskies Sunday afternoon.