Cougs End Their Run Through the Desert with a Loss to No. 12 Arizona 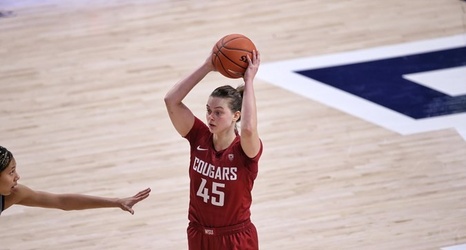 TUCSON, Ariz. – Redshirt senior Borislava Hristova tallied 18 points at No. 12-ranked Arizona on Sunday, Feb. 16, but the Washington State University women's basketball team ran into a hot-shooting Wildcat squad, as the Cougars were dealt a 72-57 loss in Pac-12 Conference action.

Hristova's 18-point performance extends her double-digit scoring streak to 20 games, which moves her into a tie with Camille Thompson (1993-94) for the third-longest stretch of consecutive double-digit scoring games for a senior in WSU history. Washington State's all-time leading scorer shot an efficient 6-of-9 from the field against the No. 12-ranked team in the nation, and went a perfect 6-of-6 from the free throw line against the Wildcats.