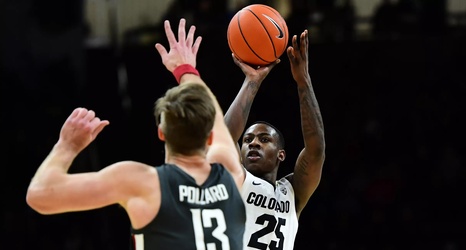 The Washington State Cougars hung tough for three quarters of the game, but the No. 23 Colorado Buffaloes were just too much in the end as they powered to a 78-56 victory in Boulder.

Coming off the emotional high of a home sweep of the Oregon schools, WSU (12-8 overall, 3-4 Pac-12) fought hard in an arena where they’ve had literally no success — they have never won at the CU Events Center — leading for nearly 11 minutes in the first half.

Freshman Noah Williams completed an and-1 with just under 10 seconds remaining in the opening period to pull the Cougs within three, although a foul on McKinley Wright with just one second left that resulted in a pair of made free throws put the Buffaloes up by five at the break, 38-33.