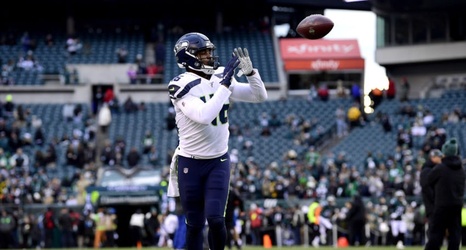 PHILADELPHIA, PENNSYLVANIA - JANUARY 05: Tyrone Swoopes #46 of the Seattle Seahawks warms up prior to the NFC Wild Card Playoff game against the Philadelphia Eagles at Lincoln Financial Field on January 05, 2020 in Philadelphia, Pennsylvania. (Photo by Steven Ryan/Getty Images)

Tell me if you’ve heard this story before. A former college quarterback enters the league and drifts from practice squad to practice squad before finally switching positions and getting some playing time at tight end.

You might think I’m talking about Logan Thomas who followed that trajectory, going from a prestigious career at Virginia Tech before being drafted in the fourth round by the Arizona Cardinals.