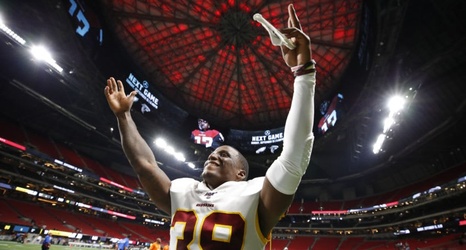 ATLANTA, GA - AUGUST 22: Defensive back Jeremy Reaves #39 of the Washington Redskins reacts at the conclusion of an NFL preseason game against the Atlanta Falcons at Mercedes-Benz Stadium on August 22, 2019 in Atlanta, Georgia. (Photo by Todd Kirkland/Getty Images)

In light of a season-ending injury at safety, the Washington Football Team has shuffled around its roster.

Washington Football Team strong safety Landon Collins redeemed his poor play in 2020 with an early forced fumble in the game against the Cowboys. That forced fumble would promptly lead to a safety, and that safety would be the jolt that kickstarted a 25-3 thrashing of Washington’s bitter rival.