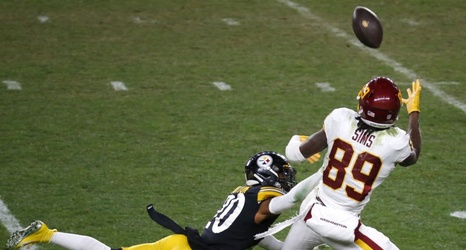 PITTSBURGH, PENNSYLVANIA - DECEMBER 07: Cam Sims #89 of the Washington Football Team catches a pass against Cameron Sutton #20 of the Pittsburgh Steelers during the second half of their game at Heinz Field on December 07, 2020 in Pittsburgh, Pennsylvania. (Photo by Justin K. Aller/Getty Images)

The Washington Football Team had their best win in years on Monday night, surpassing the undefeated Steelers by a score of 23-17.

If you’re a golf fan, the best tournament of 2020 was the BMW Championship at Olympia Fields in August. Dustin Johnson made an improbable 43-foot putt to seemingly force a playoff with Jon Rahm.