The Redskins were among the best in the NFL in generating sacks in 2018 - can they be even better in 2019? 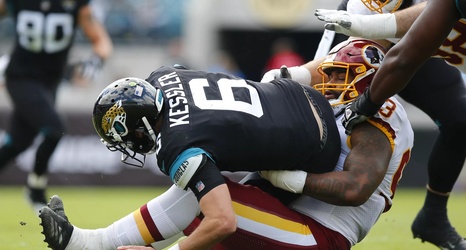 This is Jay Gruden answering a question in a press conference, talking initially about Montez Sweat rushing the passer:

“Yeah, speed, size, length; we’ve already talked about that. Now we’re just trying to hone in on – if [we’re] playing base defense, one of those guys (outside linebackers) sometimes has got to drop into coverage – so we’re working on his drops and his aiming points and all that. But from a pass-rush standpoint, obviously he will be a problem for a lot of people; even if he doesn’t get home, you’ll feel his presence because he’s so long and he’s always around the quarterback – he can make the quarterback step up into [Daron] Payne and [Jonathan] Allen, hopefully [Matt] Ioannidis and those other guys.