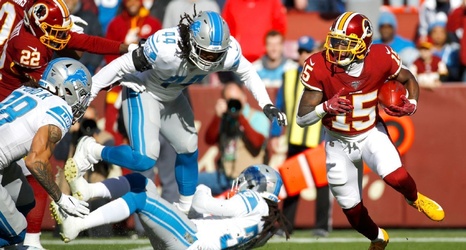 LANDOVER, Md. -- The Washington Redskins have wanted to get rookie Steven Sims more involved. On his second kickoff return Sunday, he showed why that's the case.

Sims returned a kickoff 91 yards for a touchdown in the second quarter vs. Detroit Sunday, the Redskins first kick return for a touchdown since Nov. 22, 2015. But the play highlighted what Sims offers. He initially muffed the ball, picked it up at the 9-yard line and stepped out of a tackle attempt at his feet two yards later. He then darted through traffic and down the left sideline.