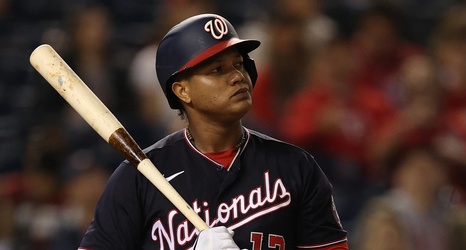 Davey Martinez’s post game Zoom call with reporters didn’t start until around an hour after the Washington Nationals dropped the series opener to the San Francisco Giants by a final score of 1-0 last night in the nation’s capital.

Giants’ right-hander Anthony DeSclafani tossed a complete game shutout on the mound in the nation’s capital, limiting the Nationals to two hits and a walk, and facing one batter over the minimum in a 103-pitch outing in Nationals Park.

But it wasn’t the eighth shutout loss of the season, the fact that they put just one runner in scoring position on the night (and went 0 for 1 with RISP), or the fact that Juan Soto hit the heck out of a ball in the bottom of the seventh only to be robbed by Mike Tauchman, on a leaping, amazing catch at the top of the left field wall, that everyone was talking about after the game.