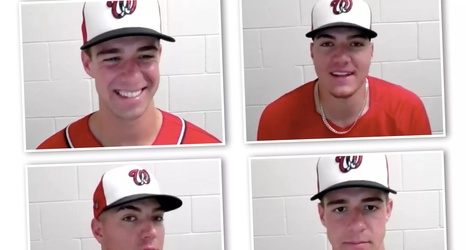 Washington’s 2019 and 2020 1st Round draft picks were both featured in Thursday’s game, which was on ESPN, so it was a good showcase for two of the top arms in the organization though Nationals’ skipper Davey Martinez was clear, getting them on a national broadcast wasn’t the goal. It was just their day to pitch.

Jackson Rutledge, 21, was the 17th overall pick in 2019’s draft, out of San Jacinto College in Houston.

Cade Cavalli, 22, was the 22nd overall pick in the 2020 Draft, taken out of the University of Oklahoma.

Both faced the New York Mets in their respective Grapefruit League debuts this week, with Cavalli out of the bullpen first in the second inning.