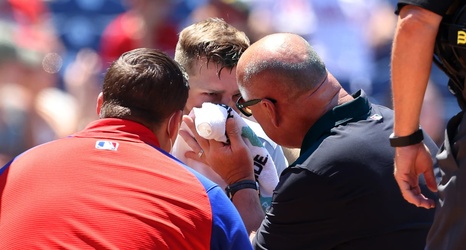 “Thank you to everyone at Thomas Jefferson University Hospital for the great hospitality and setting me straight,” Austin Voth joked, after the doctors at the hospital in Philadelphia fixed his broken nose.

Voth, 28, was hit in the face with a fastball from Phillies’ starter Vince Velasquez on Sunday afternoon, as he squared to bunt in a third inning plate appearance.

The right-handed reliever, who was starting on a bullpen day in the series finale in Citizens Bank Park, was helped off of the field, though he was able to walk, and he remained in the hospital while the team moved on to Tampa Bay.