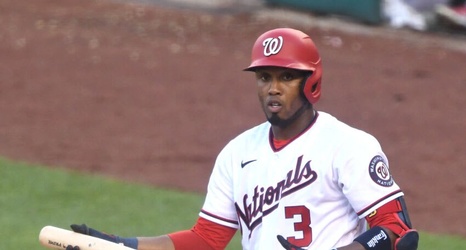 Alcides Escobar #3 of the Washington Nationals looks on during a baseball game against the Toronto Blue Jays at Nationals Park on August 18, 2021 in Washington, DC. (Photo by Mitchell Layton/Getty Images)

In the series opener against the New York Mets, Washington Nationals pitchers held their opponents to just four hits. The result was a 2-1 Nats win. That Mets lineup featured Francisco Lindor, Javy Baez, Pete Alonzo, and J.D. Davis. Mets fans were unhappy, voiced their displeasure, and the whole thumbs down to the fans celebration for certain players was eventually revealed.