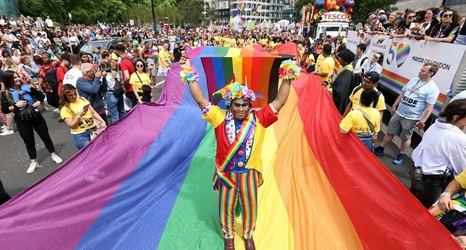 LONDON — The streets of London were filled with color on Saturday as the U.K. capital marked 50 years of Pride.

A vibrant crowd of hundreds of thousands turned out to either take part in or watch the festivities, forming a spectacle of rainbow flags, glitter and sequins.

After two years of cancellations because of the coronavirus pandemic, the parade came a half-century after London’s first march to celebrate Pride in 1972.

Saturday’s procession took on a similar route to the original, starting outside Hyde Park and touring the streets towards Westminster. It was to be followed by a concert in Trafalgar Square.