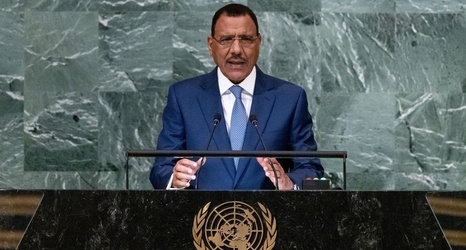 UNITED NATIONS (AP) - The Latest on the U.N. General Assembly:

Mohamed Bazoum said prolonged droughts brought on by global warming are “threatening the practice of pastoral farming” in West Africa. That’s causing many young shepherds to turn instead to extremist groups.

“Terrorism operating the Sahel today is linked to the living conditions for certain communities where the environment has been significantly affected by climate change,” Bazoum told the U.N. General Assembly on Thursday.

While thanking France, the United States and Germany for their help in fighting the insurgency, Niger’s leader also decried a persistent lack of international funding.