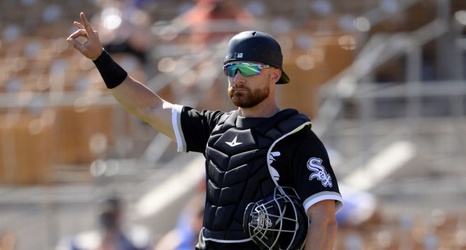 Jonathan Lucroy #23 of the Chicago White Sox catches against the Los Angeles Dodgers on March 8, 2021 at Camelback Ranch in Glendale, Arizona. (Photo by Ron Vesely/Getty Images)

Entering last offseason, the catching cupboard was barren. At the major league level and apparently at the minor league level as well. Veterans Yan Gomes and Kurt Suzuki had held down the fort the past two seasons, with Raudy Read and Tres Barrera behind them. Some speculation revolved around signing either J.T. Realmuto or James McCann, the top two free agent catchers available, when free agency opened. The Washington Nationals chose several cheaper (much cheaper) options, though were left scrambling for a fill in once COVID hit the team.