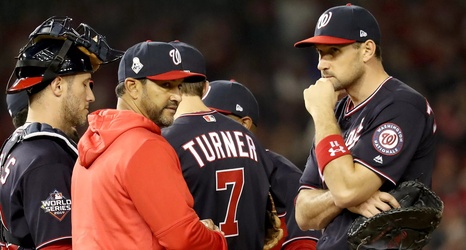 Patrick Corbin gave up two runs on four consecutive singles over a seven-pitch stretch in the first, then gave up a leadoff walk and a two-run homer to back-to-back batters in the top of the fourth as the Houston Astros jumped out to a 4-0 lead in Game 4 of the World Series.

Astros’ rookie starter/opener Jose Urquidy took the mound with a two-run lead, had a four-run lead after four, and tossed five scoreless innings on 67 pitches, holding the Nationals to just two hits.

It was 4-1 in the seventh when Alex Bregman hit a grand slam off Fernando Rodney which blew things open in what ended up an 8-1 win which tied the World Series up at 2-2.