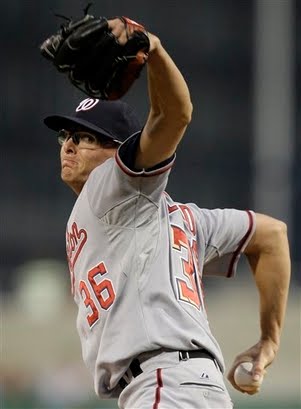 Clippard is 1-0 with a 1.96 ERA in 37 appearances with the Nationals. The All-Star citation is the first of his career. Clippard leads MLB with 21 holds. The only other big league pitcher with as many as 18 holds is Rafael Betancourt (18) of the Rockies.

During his stellar first-half effort, Clippard has struck out 57 in 46.0 innings. The 57 strikeouts rank second among MLB relief pitchers, and his 11.4 strikeouts per 9.0 innings pitched rank eighth among relievers to have amassed 35.0 or more innings.

Since the beginning of last season, Clippard's 169 strikeouts and 44 holds rank second and fourth, respectively, among MLB relief pitchers.

Clippard has thrown the most innings in a Nationals bullpen that currently ranks 10th in MLB, seventh in the NL, with a 3.29 ERA.

Clippard is the second Nationals pitcher to earn an All-Star invite in as many seasons. Last season, Matt Capps and his 23 saves represented the Nationals in the Mid-Summer Classic.

The 26 year-old Clippard was acquired by the Nationals on Dec. 5, 2007 in a deal that sent right-handed pitcher Jonathan Albaladejo to the Yankees.