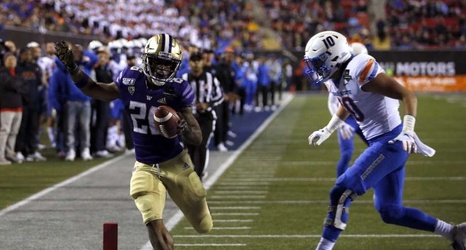 LAS VEGAS (AP) — Jacob Eason threw for 210 yards and a touchdown and Washington sent out coach Chris Petersen with a 38-7 victory over No. 18 Boise State in the Las Vegas Bowl on Saturday night.

Richard Newton rushed for 69 yards with a short touchdown run and threw a touchdown pass for the Huskies (8-5). They capped an erratic season with a dominant finale for Petersen — who left Boise State to coach Washington — after he announced Dec. 2 he was stepping down after six seasons. Myles Bryant and Elijah Molden had interceptions, and coordinator Jimmy Lake’s defense allowed 266 yards.