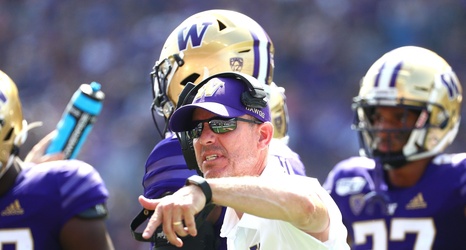 Over the last few seasons, Washington football has started to dominate in the trenches, and a lot of that is thanks to offensive line coach Scott Huff, who just landed his fifth recruit of the 2020 cycle.

Enter Samuel Peacock, a 6’6, 265-pound offensive lineman out of Gig Harbor (Wash.) High. Peacock was previously committed to Oregon State, before flipping today by announcing his commitment to the Dawgs. No matter who the opponent is, it’s always nice to steal a commitment away from a conference rival.

Peacock is a raw, underrated talent who Huff will definitely be able to get the best of, and looks like he has the athleticism to play both guard and tackle, and with a position that’s as injury prone as offensive line can be, there’s no such thing as too many offensive linemen.