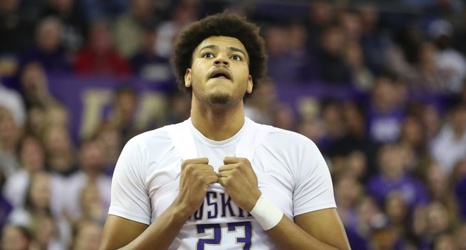 SEATTLE, WASHINGTON - FEBRUARY 20: Bryan Penn-Johnson #23 of the Washington Huskies reacts in the first half against the Stanford Cardinal at Hec Edmundson Pavilion on February 20, 2020 in Seattle, Washington. (Photo by Abbie Parr/Getty Images)

The sophomore member of Hopkins’ first recruiting class will depart Washington basketball after appearing in only 11 games in two years.

Thursday morning, Washington basketball’s sophomore center Bryan Penn-Johnson announced via his Twitter that he will be seeking to leave the program and enter his name into the transfer portal.

“I would like to thank Coach Hopkins, Coach Rice, Coach Dollar, Coach Conroy, and the rest of the Husky staff of all of the knowledge and support that I have received during my time at the University of Washington,” he said in the statement.