UW freshman RaeQuan Battle is showing what he can do on the court. The Huskies can thank his mom for that. 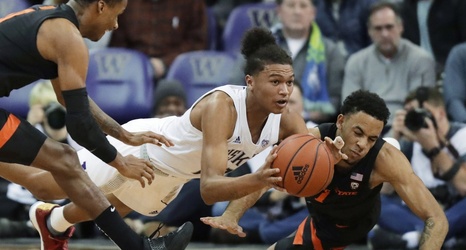 She couldn’t help herself, but tears flowed uncontrollably down her face as she watched her son RaeQuan Battle take over the first half of Washington’s 64-56 win over Oregon State on Thursday night.

“It kind of hit me in a flash like everything that we worked on is paying off,” Williams-Battle said. “People are around us we’re like ‘Wow. Look at his shot.’ And I listened to the student body talk and they were saying ‘Omigosh RaeQuan is amazing.’

Even when Battle is by himself, he’s never alone.

Washington's 'other' freshmen step up big in win over OSU

The former Marysville-Pilchuck High star, who grew up on the Tulalip Reservation and is believed to be the first from the Tulalip Tribe to receive a Division-I basketball scholarship, receives the full support and love from his tight-knit Native American community.