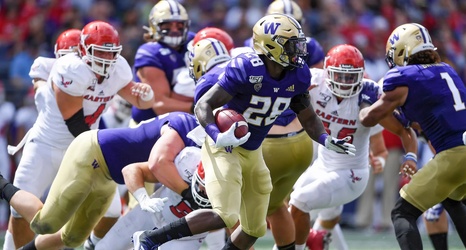 Coming into the season there was hope among many that some of the younger members of the wide receiving corps would supplant their older brethren. Early indications are that this isn’t going to be the case. Seniors Andre Baccellia, Aaron Fuller, and Chico McClatcher dominated the playing time at WR while the game was still in question. Puka Nacua and Austin Osborne each saw a single snap before the Huskies scored TD #6 and Terrell Bynum got on the field 4 times. That’s it.

From a production standpoint that wasn’t a bad thing.