Washington Football Team: How Jaret Patterson can be another UDFA find 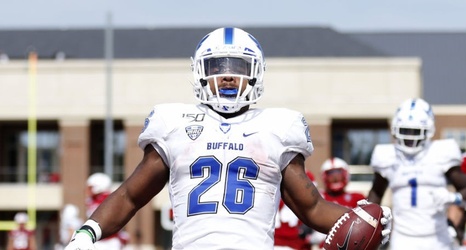 OXFORD, OHIO - SEPTEMBER 28: Jaret Patterson #26 of the Buffalo Bulls in the end zone during the second quarter in the game against the Miami of Ohio RedHawks at Yager Stadium on September 28, 2019 in Oxford, Ohio. (Photo by Justin Casterline/Getty Images)

The Washington Football Team has had some recent success with signing undrafted free agents that eventually become contributors.

In 2019, they signed Steven Sims Jr. He made the team in 2019 after a stellar performance in Week 4 of the preseason and went on to total over 1,000 all-purpose yards as a WR/KR during his rookie season before taking a step back in 2020, struggling with drops issues and fumbles.