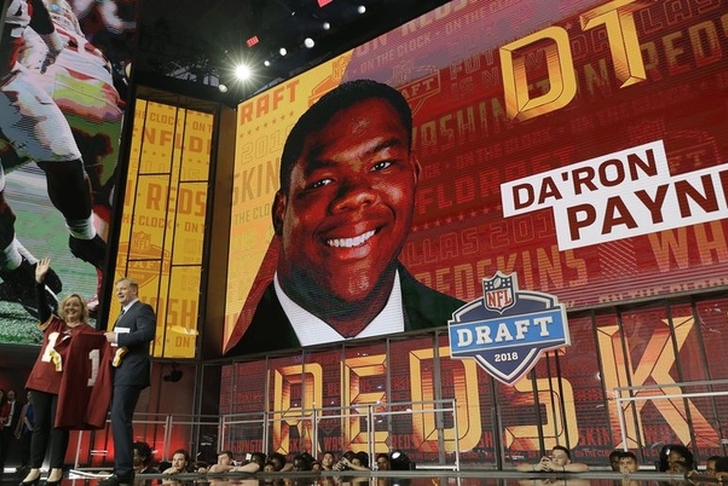 USA Today
Grade: C-
Breakdown: "First-round DL Da'Ron Payne is made to order for the league's worst run defense, and fifth-round NT Tim Settle will also help. In second-round RB Derrius Guice, Washington took a player who could add offensive rocket fuel ... assuming concerns that apparently scared so many teams off prove unfounded. T Geron Christian and S Troy Apke are physically gifted but unlikely to contribute for some time."

ESPN
Grade: B+
Breakdown: "This is a good class, especially at the top. There was the biggest need filled with nose tackle Da'Ron Payne at No. 13. The Redskins had the worst rush defense in the league in 2017, surrendering 2,146 yards. And now Payne gets to partner up with a (hopefully) healthy Jonathan Allen, another Alabama defender who fell to Washington in Round 1 last year. Remember that Allen was looking like a Pro Bowl player before he got hurt. That D-line could be tough inside.

"Then Washington upgraded its running game with Derrius Guice, my second-ranked back, who fell all the way to 59. Look, we don't know the exact reason why he dropped -- he has first-round talent -- but clearly teams were scared off by some questions. On the field, he's a really good player who can run over defenders with power and away from them with speed. When he replaced an injured Leonard Fournette in 2016, there was no drop-off, and he averaged 7.6 yards per carry. Also, fun note from my friends at ESPN Stats & Information: This is the eighth straight draft in which Washington has drafted a running back.

"One of my favorite offensive tackles in this class is Geron Christian, who fell to Washington at 74 . He's raw, but he could be a starter at the next level. Safety Troy Apke (109) ran a blazing 4.34 40 at the combine, but he started only one season at Penn State. I graded him as a special-teamer and likely late Day 3 pick. Inside linebacker Shaun Dion Hamilton (197) has dealt with injuries, but he's a starting-caliber player if he can stay on the field. Defensive tackle Tim Settle (163) is a sleeper because the best version of him is a guy who goes much earlier. I had a fourth-round grade on Mr. Irrelevant, wide receiver Trey Quinn. That's a value pick at No. 256 for a slot receiver who caught 114 passes last season."

Bleacher Report
Grade: C-
Breakdown: "The Washington Redskins had a seemingly random rookie class join the roster. It makes sense they'd want to address the nose tackle position considering the defensive line has been problematic for several years. As well as Da'Ron Payne played in the College Football Playoff, he hasn't bottled up his physical traits consistently enough to be counted on as more than a run-stuffer. If Payne doesn't develop as a pass-rusher, he'll be a one- or two-down player with maddening inconsistency on passing downs.

"Second-round running back Derrius Guice was a tremendous steal at 59th overall and will finally be the workhorse the franchise has been searching for. His power, balance and toughness demoralize opponents throughout the game. He and Chris Thompson will combine to make one of the best duos in the NFL.

"The rest of the Redskins' haul is a roll of the dice. Geron Christian and Troy Apke are upside picks but not quality players right now. Their two seventh-round picks are competitors and have a chance of sticking at least, but there's not a sure thing outside of Payne's run defense and Guice in this class."

SB Nation
Grade: A
Breakdown: "Arguably no team had a better first two picks in the draft than Washington. It started with defensive lineman Da’Ron Payne with the 13th pick in the first round. He rejoins former Alabama teammate Jonathan Allen in Washington and gives them a pair of excellent run stuffers. Payne is better than he’s getting credit for at creating pressure.

"Derrius Guice was the storyline of the second round of the draft and a steal at No. 59. On pure talent, Guice is a first-round player. He runs with balance, vision and power. He’s also deceptively fast. If Guice is clean off the field, Washington has a star back.

"Offensive tackle Geron Christian, taken 74th, is one of the draft’s more athletic pass blockers. He may not see the field for a while, but there’s a lot to work with in his game. Washington got another run stopper in the fifth round with Virginia Tech’s Tim Settle. He was by far by best player available when he was selected. He may not be an every down player, but he’s a good run stopper. If he can stay healthy, sixth-round pick Shaun Dion Hamilton could be a good player as a weak-side linebacker."

Yahoo Sports
Grade: B+
Breakdown: "Payne could end up being a nice get. Watch his film from the College Football Playoff for proof; he can be a true disruptor. Derrius Guice was a great value pick, but there’s a reason he fell. However, if there are no more off-field issues with Guice, Washington got a first-round talent near the end of the second round. I’m fine with that gamble. Washington needed some offensive line depth, and tackle Geron Christian in the third round helps. The fourth-round pick of Troy Apke was odd because he didn’t do much at Penn State, but the safety is fast and athletic and maybe can develop while he helps on special teams. I firmly believe Guice ends up being a great pick, which bumps up Washington’s grade."

Sports Illustrated
Grade: C+
Breakdown: "Here’s an argument for why Washington’s front office will be telling the truth when it says Da’Ron Payne, and not Vita Vea (taken one spot earlier by the Buccaneers), was their top target all along: Payne can rush the passer. He has light feet and some oomph in his movement. A pass rush is critical when you play as much zone as Washington, and let’s also remember that Payne should help a run defense that ranked 29th in yards per attempt last year. Interestingly, Washington also drafted an Alabama interior pass rusher in the first round a year ago: Jonathan Allen.

"In Round 2, Derrius Guice is an apparent risk. If it works out, he gives this backfield more talent than it’s had since Clinton Portis. Third-round pick Geron Christian is here to either become a guard (Washington’s most conspicuous area of need offensively) or to provide flexible depth off the bench like Tye Nsekhe has done so well. Nsekhe will have a chance to compete at guard this season and could get better offers in free agency in 2019; consider Christian a down-payment on filling his void."