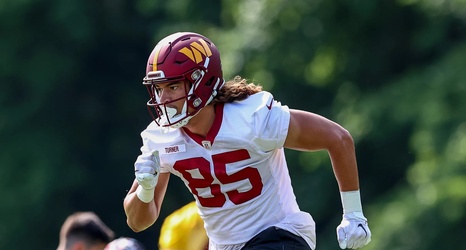 Logan Thomas has repeatedly stated that he is aiming to come back by week one of the regular season. He very well may be ready, but in the meantime, training camp will be underway shortly, and Washington has a plethora of inexperienced tight ends looking to make their way onto the roster. John Bates and Sammis Reyes are both entering their second season; however, Cole Turner, Armani Rodgers, and Curtis Hodges are rookies. Furthermore, Antonio Gandy-Golden is a first-year tight end, playing his previous two seasons as a receiver for Washington. With Thomas’s status unclear for now, Washington needs to identify who can fill his role within this group.