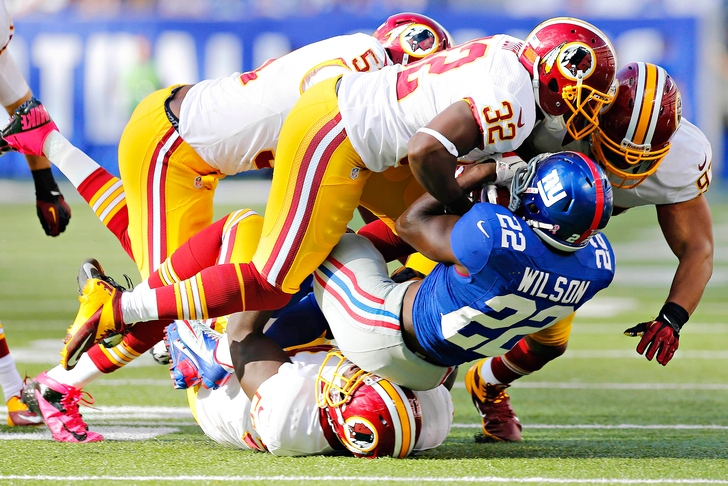 Both the Washington Redskins (1-2) and New York Giants (1-2) came into this Thursday Night Football showcase feeling good about the direction their respective teams are going in. Each team looked to keep the good feelings alive in a pivotal early-season clash in the NFC East.

Here's what we saw in the first half...

Cousins Gets Blindsided: After he quickly pulled the Redskins out of the shadow of their own goal post on the team's first drive, new Redskins starting quarterback Kirk Cousins was hit with Mack truck force by the Giants' Mathias Kiwanuka on a 3rd-and-9. New York's Cullen Jenkins would scoop up a Cousins fumble, and just six plays later, Eli Manning would find TE Larry Donnell for the game's opening score. Cousins would have to shake off the cobwebs quickly, down 7-0.

Case in point - Donnell's second TD grab (this one a beast of a six-yard grab) gave New York a 14-0 lead under a minute into the second quarter, as the Redskins' offense was in desperate need of a counterpunch.

Challenge Accepted: On the Redskins' very next drive, Kirk Cousins would display why he was one of the most talked-about backup quarterbacks in recent memory before becoming the Redskins' starter. He was surgical for Washington, going 6-of-7 for 68 yards on a ten-play, 80-yard drive - a possessioncapped off by a brilliant 18-yard TD strike to WR Andre Roberts. The Redskins' offense had provided its first answer of the night, and with the deficit cut to just one score at 14-7, it couldn't have come at a better time.

Donnell's Encore Of His Encore: Ladies and gentlemen, the New York Giants might have found their tight end of the future. Larry Donnell became the first Giants TE since Joe Walton in 1962 to catch three TD passes in one game, as he hauled in another six-yard catch to do in one half something that legendary New York tight end Mark Bavaro never did in a full game.

The Giants rode Donnell's historic half (and an amazingly-efficient outing by QB Eli Manning) to a 21-7 lead , as the Redskins' crowd was legitimately stunned.

A Scary Moment For Washington: Already without starting TE Jordan Reed due to injury, the Washington Redskins could also find themselves without tight end Niles Paul on the depth chart. Paul was knocked seemingly unconscious on a vicious hit by the Giants' Quintin Demps. Demps would be flagged for unnecessary roughness (on a play that was ruled a catch after further review), but the Redskins were left with just Logan Paulsen at the tight-end spot with Paul being evaluated for a concussion.

Paulsen would promptly fumble the ball away after a catch just a couple plays later, as everything looked to be going wrong for Washington. New York would capitalize as Eli Manning would connect with Victor Cruz for 29 yards to set up a Josh Brown chip shot.

He'd nail it, and the Giants led 24-7 at the half after scoring on four of their six first-half possessions.