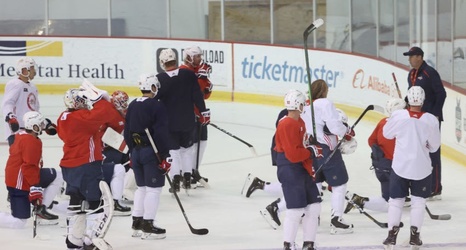 The Washington Capitals have made the following roster cuts.

The Washington Capitals have trimmed their training camp roster. After having an intrasquad scrimmage, their second and final, Peter Laviolette has met with several players in his office last night. The Caps loaned several players to the Hershey Bears and placed several more on waivers.

The Caps loaned the following to the Bears: Kody Clark, Brett Leason, Garrett Pilon, Joe Snively, and Riley Sutter. Additionally, the Caps have re-signed Axel Jonsson-Fjallby from Vasterviks to Hershey, and Hendrix Lapierre has been loaned to Chicoutimi of the Quebec Major Junior Hockey League.