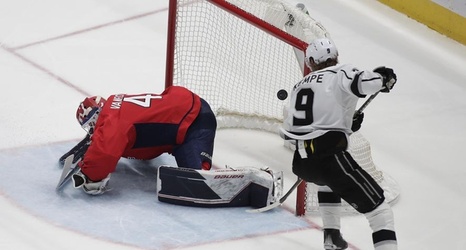 Adrian Kempe scored the tiebreaking goal midway through the third period to give the Los Angeles Kings a 3-2 win over the undermanned Washington Capitals on Sunday night.

Washington was missing forwards Nicklas Backstrom, Evgeny Kuznetsov, T.J. Oshie and Michael Sgarbossa, all on the COVID-19 list. Oshie was placed on the list earlier Sunday, and Sgarbossa was a late scratch.

Garret Sparks, recalled from the minors before the game, stopped 33 shots for his first NHL win since March 20, 2019.

Blake Lizotte scored short-handed and Christian Wolanin also had a goal for the Kings, who trailed by two late in the second period.