Why Kirby Smart Should Be The Next Coach At VA Tech 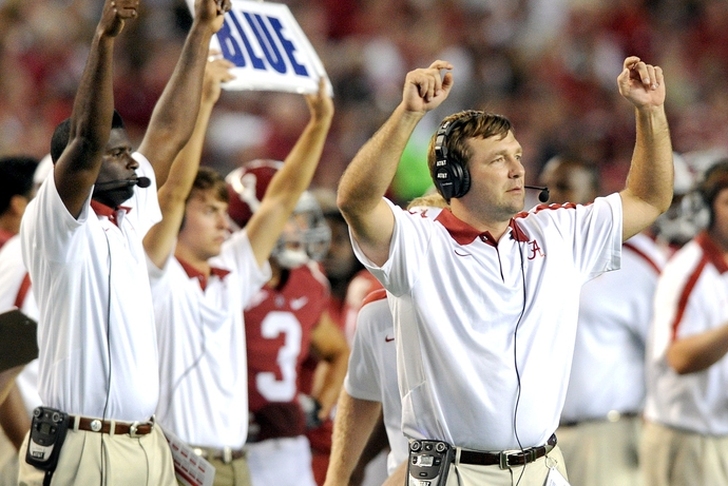 The Virginia Tech Hokies will sift through a boatload of options before naming legendary head coach Frank Beamer's permanent successor, but we've already got a #1 option on our minds. Alabama Crimson Tide defensive coordinator Kirby Smart is the right guy at the right time for the right team. Here's 3 reasons Why Kirby Smart Should Be The Next Coach At VA Tech.

3. His Pedigree Is Undeniable

Smart has been honored twice as a National Assistant Coach of the Year, both in 2009 (Frank Broyles Award winner) as well as in 2012 (AFCA Assistant Coach of the Year). He's been the man behind the curtain during Nick Saban's rise to legendary status, constantly interweaving defensive talent to maximize efficiency and production. Have you watched Alabama's run defense this year? They are a force of nature, and Smart's ability to coach them up is a huge part of that.

2. Up The Defensive Ladder

Heading into Week 10, Virginia Tech has the 32nd ranked total defense in the FBS. To be perfectly frank, there's enough there for the Hokies on that side of the ball (both currently on roster and future recruits) to put together a Top 15 defensive unit or better. With Smart overseeing the operation, that's not a pipe dream. In fact, it would be an upset if that didn't happen within his first year or two.

Making $1.2 million this year at Alabama, Smart has built quite a niche for himself in Tuscaloosa both financially and job security-wise. Smart has turned down several high-profile assistant jobs since taking the DC role for the Tide in 2008, but he's reportedly only interested in moving on to a head coaching position -- and it'd have to be the RIGHT position at that. Virginia Tech is the perfect storm of opportunity and prestige for Smart. If he comes in as Beamer's successor and takes VA Tech to the next level, he'd instantly become a Hokies fan base favorite and a fixture in Blacksburg. The pieces are there. Virginia Tech would be silly not to make the move.