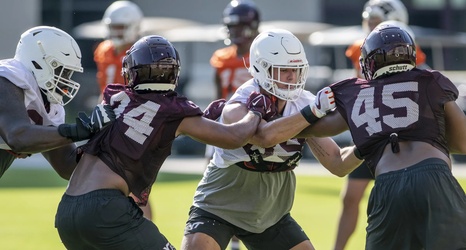 One day after the Virginia Tech Hokies opened fall camp, head coach Brent Pry met with the media. It is Pry’s first time meeting with the media during fall camp. The coach covered a number of topics such as how he wasn’t pleased with his team’s first practice on Tuesday but saw an improvement on Wednesday.

“A lot of things yesterday that weren’t good enough, that were disappointing a little bit,” Pry said per Evan Watkins of 247Sports. “The entire team, particularly the defense, battled back today and had a good day. I just talked to the guys, and there is adversity on day one for some guys and certain units; there is adversity on day two; that’s what camp is all about.