Kurkjian entertains in the return of Baseball Night in Blacksburg 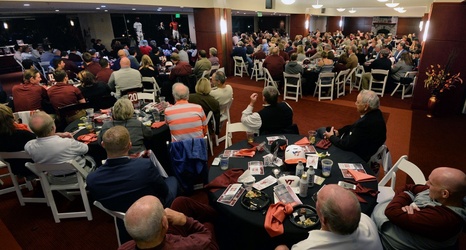 BLACKSBURG – Virginia Tech’s annual Baseball Night in Blacksburg returned in 2018 – after a year’s hiatus – with a home run on Saturday night, as many in attendance for the first time got to meet and hear in person from Hokies head coach John Szefc and were entertained by the anecdotes of Major League Baseball analyst Tim Kurkjian.

Held on the fourth floor of Lane Stadium in the President’s Suite, guests were able to take part in a silent auction that featured such items as a lunch for two with former football coach Frank Beamer and the same with Coach Szefc, signed MLB jerseys of Chad Pinder, Joe Mantiply and Ben Rowen and a signed Mark Zagunis bat, among other items.