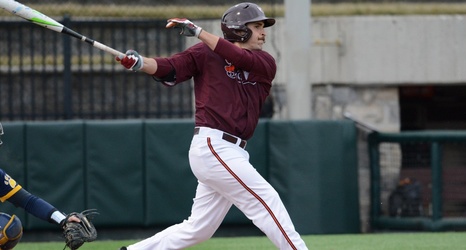 MORGANTOWN, W.Va. – In the program’s first trip to Morgantown since 2003, the Virginia Tech Hokies baseball team fell behind early as the West Virginia Mountaineers capitalized on several Hokie miscues. However, Tech mounted a late comeback that came up short and WVU took the game by a score of 5-4 on Tuesday night in nonconference action at Monongalia County Ballpark.

Tom Stoffel led Tech offensively with a two-hit night. His two-RBI single in the seventh finished off a three-run Hokie frame and pulled his team to within one at 5-4. He also singled with two outs in the ninth as Tech tried to get the equalizer.