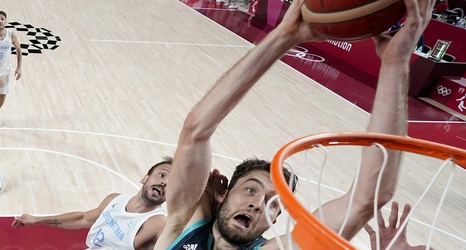 Former Virginia men’s basketball star Mike Tobey got his Olympics off to a hot start late Sunday night as his Slovenian squad knocked off Argentina, 118-100, in the opening game for both teams. Tobey scored 11 points on 5-for-10 shooting and grabbed 14 rebounds in the win. It was a big win for the Slovenian team — which was also making its Olympic debut — and Tobey meshes well with NBA superstar Luka Doncic.

Doncic had 48 points in the victory and dished five assists.

Tobey is garnering a lot of on online chatter with his performance, with some Dallas Maverick fans on Twitter wanting Doncic to bring the 7-footer back to the NBA with him.