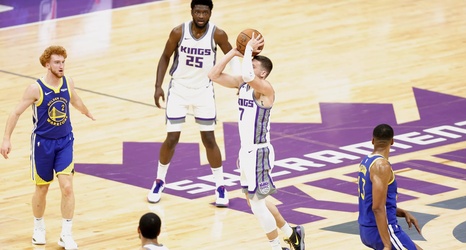 With just over six seconds left in Sacramento’s preseason game against the Golden State Warriors, Kyle Guy got the ball off an inbounds pass. His Kings squad was down by two and needing a bucket to try and salvage a win in a game that they once led by 19. Guy nearly collided with his teammate at the top of the arc, but spun free and lost his defender in the process. After a perfectly executed pump fake that got the help defender off his feet, Guy canned the game-winning shot as time expired.

Guy was fabulous all night, finishing with 20 points in 21 minutes on an efficient 7-for-11 shooting night.